When I purchased my little cottage, it had a cute little garden at the front that was completely overgrown and filled with Agaves and Yuccas. I hate Agave and Yucca, so they were ripped up pretty quick and given away via my local community page on Facebook.

Underneath those trashy plants was a rather bedraggled passion fruit vine. Hurray! Released from the undergrowth, it went crazy in all directions.  In order to contain it (it was starting to grab my front porch posts), I decided to build a Teepee as a trellis. Some time ago I'd seen a picture of a Teepee trellis for beans and tried to emulate it, but it was a dismal failure because my beans kept dying.

As I'd chopped the bamboo by hand, there was no way I was going to throw it out, so its been sitting in the shed for months waiting to be re-used.

I hammered some stakes into the ground and tied the bamboo onto the stakes with wire. 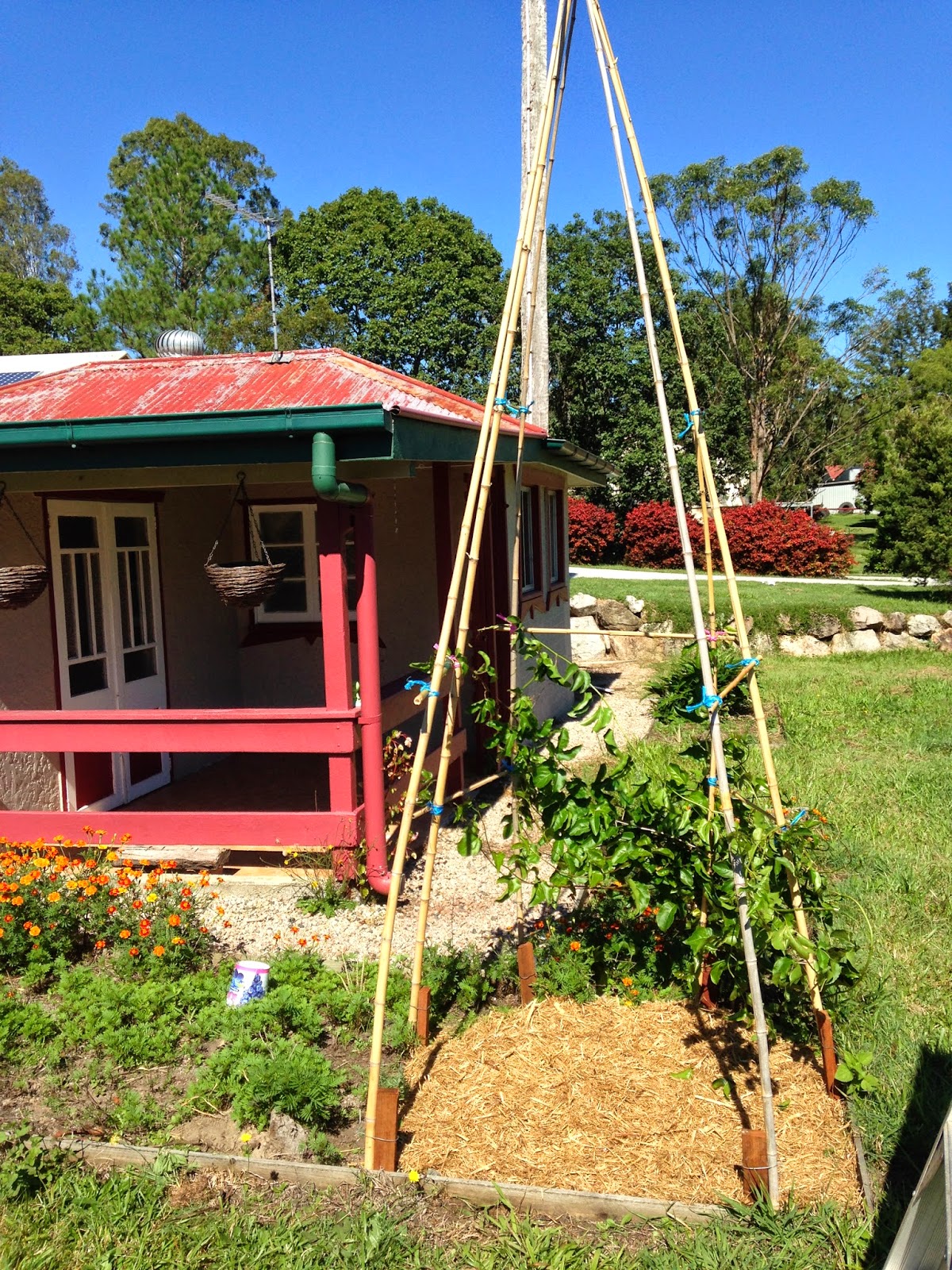 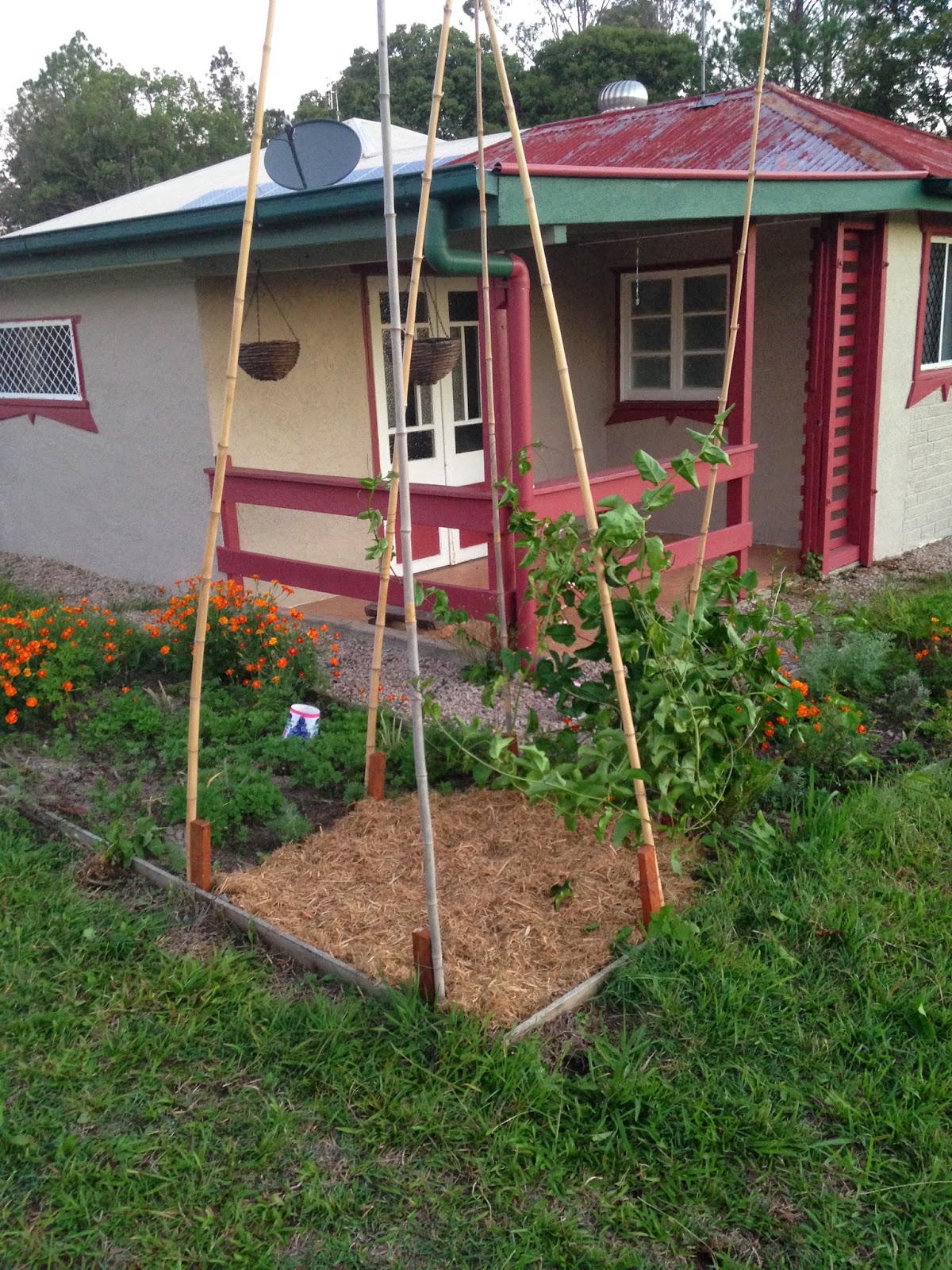 The Bamboo is attached at the top with Baling twine and I also used baling twine to attached the bamboo 'cross-bars'. Baling Twine is that string that comes around bales of hay and is the best stuff ever for a huge variety of uses. I loosely tied the passion fruit vine onto the teepee using butchers twine. Eventually the butchers twine will rot off because its made from cotton and will cause minimal damage to the plant. When staking or tying up plants, plastic or wire shouldn't be used, only material that will eventually rot. 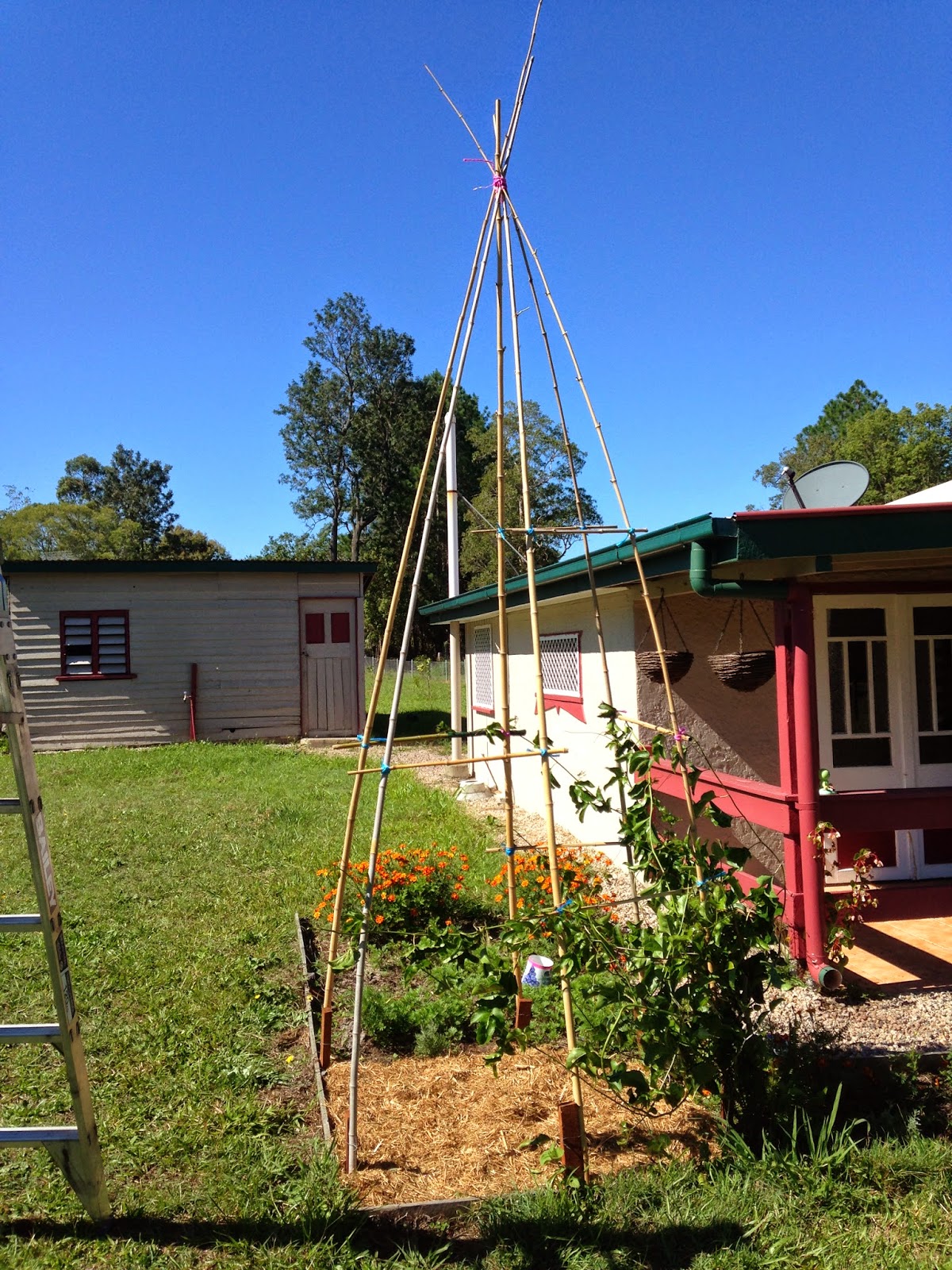 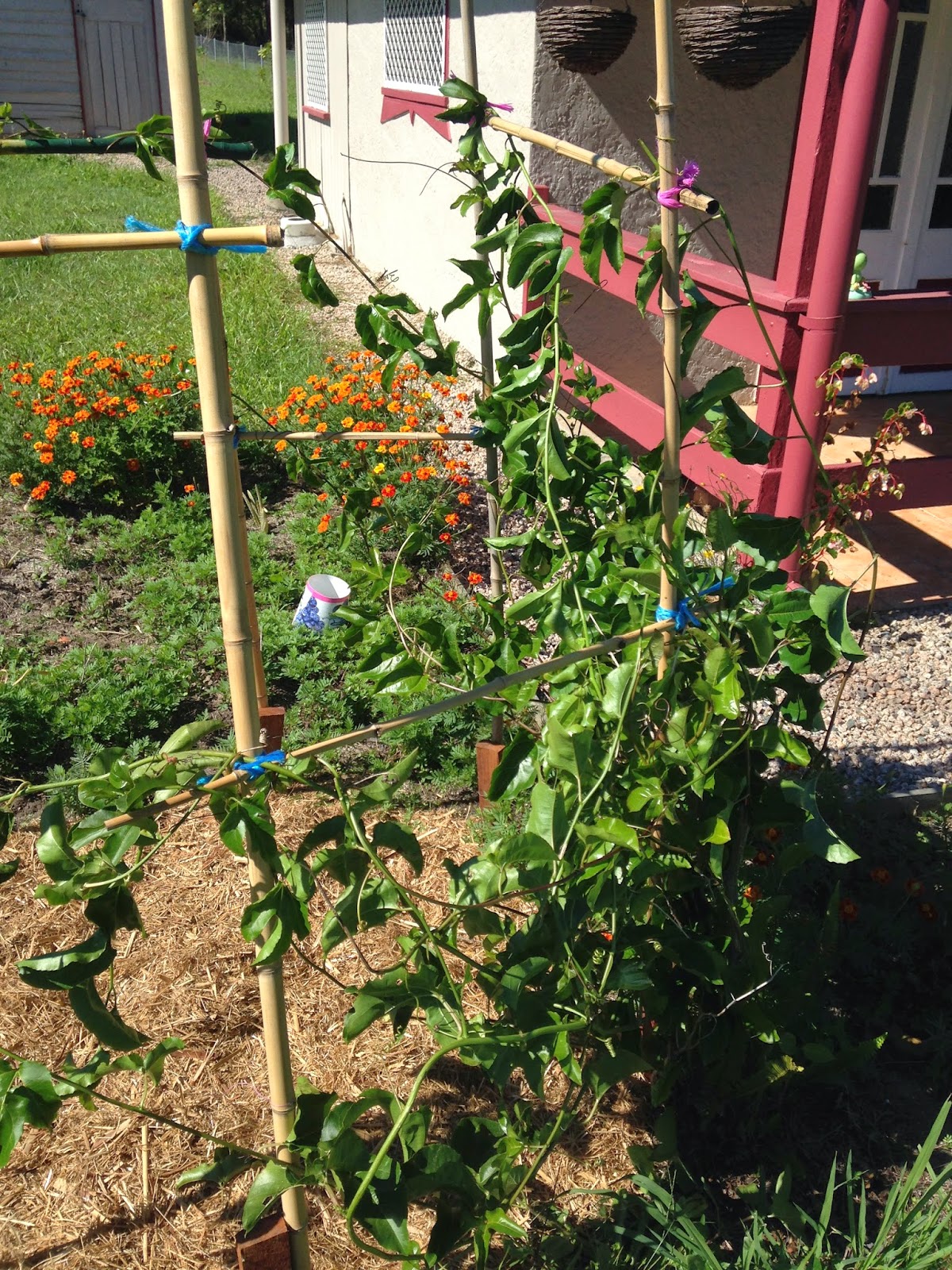 Anyway, this only took me about an hour to do and I think it looks super cute. I mulched underneath so nothing would grow and added a log on top of two bricks to make a little bench. In a year or so this will make a great little hide-away for Gigi to play in. 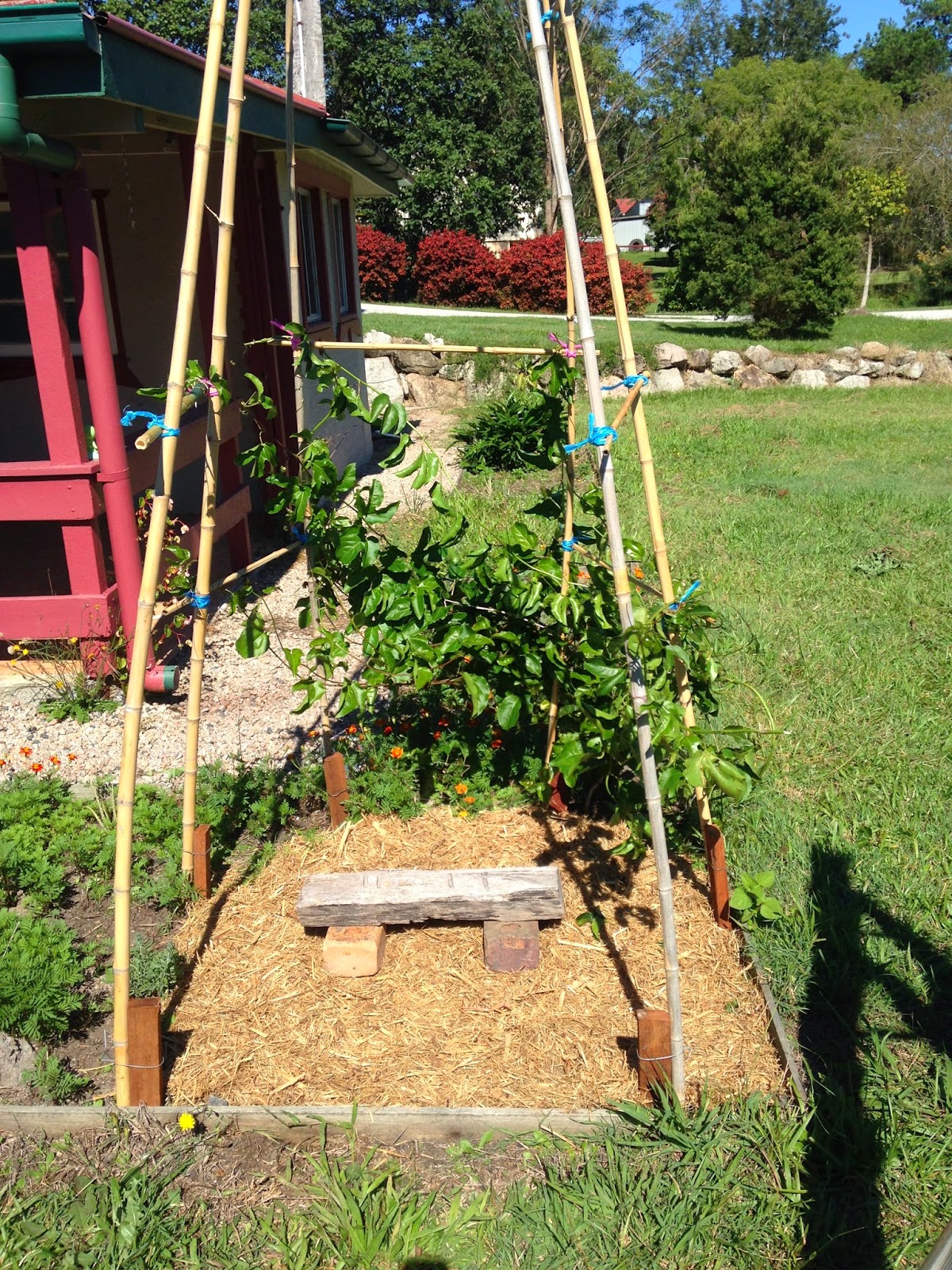